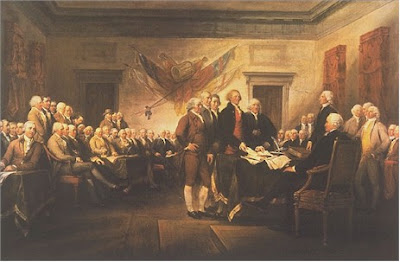 The live re-creation of John Trumbull’s painting “Declaration of Independence” in Newport, Rhode Island on July 3rd and 4th 2011 is a celebration that will bring the history of the United States to Newport and make a solid re-vitalized connection in terms of history and art with the birth of our nation. The re-creation will be a totally live creation of the painting in Newport’s Old Colony House with attention to detail. The painting features 47 men who signed the Declaration of Independence on July 4th 1776. We will call upon ancestors of the signers of the Declaration of Independence, as well as leaders in the Newport community to portray the founding fathers in the recreation of this historic portrait on July 4th, 2011. This re-enactment of Trumbull’s painting will be captured in photographs, and on the canvas of local artist and painter William Heydt. This live portrait recreation will be viewable to the general public at scheduled times throughout the Monday, July 4th 2011 festivities, with the opportunity for pictures and autographs with the portrayers of the founding fathers. In addition, the painting participants portraying the founding father will be strolling Washington Square throughout the day to tell the public about their particular characters life, accomplishments, dedication and sacrifices for freedom. This event should bring local, regional, and probably national attention to the historic center of Newport, and also bring together all organizations and citizens committed to the re-vitalization of Newport and Washington Square. It will be our personal tribute to our history, and the creation of a 4th of July tradition for generations to come.